Participating in the effort to rid our nation’s capital of anthrax contamination, IES provided technical expertise and specialized equipment at the Hart, Ford, and Longworth buildings in Washington, D.C. IES crews conducted round-the-clock operations employing a variety of decontamination strategies.

IES was selected for this project due to its decontamination experience and that of handling extremely dangerous and toxic gas, in this case, chlorine dioxide. Chlorine dioxide gas was used to destroy anthrax spores and sterilize contaminated areas. During a recent interview on CNN, (December 1, 2001), IES President, Jeff Gold, outlined the rationale behind use of chlorine dioxide and techniques used to apply it.

IES is proud to have helped turn back this attack on our nation’s capital and stands ready to aggressively address biological weapon problems anywhere in the world.

As part of the effort to reduce the world’s stocks of chemical weapons, IES technology has been licensed and employed by the United States Army since 1994. As an early participant on the non-stockpile program, IES engineers applied our patented technology and worked to design, fabricate, and test several prototype mobile treatment systems. The latest addition to the US non- stockpile program, the Explosive Destruction System (EDS), uses patented IES accessing technology tested at Porton Down and proven on targets containing active GB nerve agent at the Rocky Mountain Arsenal. In addition, field operations at Johnston Island, Toole Army Depot, and Redstone Arsenal have been supported with both our technical personnel and specialized equipment.

IES has recently turned its attention overseas in response to the widespread need for mobile processing systems in Europe, Asia, and the Middle East. From processing explosive chemical shells fired during World War I to determining optimal accessing techniques for leaking Cold War-era munitions, IES possesses both the equipment and skilled personnel suited to address this menacing problem. 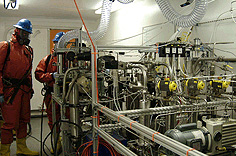 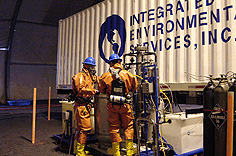 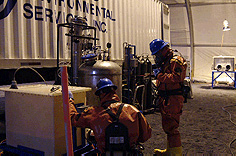 Division 4.3 Dangerous when wet material Upon contact with water material is liable to become spontaneously flammable or give off flammable or toxic gas.

Division 4.2 Spontaneously combustible material A pyrophoric material is a liquid or solid that, even in small quantities and without an external ignition source, can ignite within 5 minutes.